Fairtrade announces a new base wage for all Fairtrade certified banana plantations. The revised standard marks a unique move towards a living wage, benefitting thousands of workers worldwide.

The new Fairtrade Base Wage is set at 70 percent of the take-home pay needed for a living wage and will be paid from 1 July 2021 onwards. It applies to all countries and is unique amongst certification schemes in making a concrete step towards a living wage – that is, a wage that provides workers enough for food, healthcare, schooling and other essentials for themselves and their families, plus a little extra to put aside. Every Fairtrade banana plantation worker will get at least the base wage, even if the legal minimum wage is lower. And if they already receive more, their wages can’t be lowered.

Ensuring a living wage for banana workers remains one of the most pressing and unresolved challenges for the banana sector. Workers in many producer countries are paid the national legal minimum wage but, in most cases, this is still below a living wage. Also, in a number of regions, workers are not represented by trade unions that can negotiate on their behalf for better wages. What’s more, the COVID-19 pandemic has increased the insecurity and vulnerability of millions of agricultural workers worldwide, including those working on Fairtrade certified banana plantations. The new Fairtrade Base Wage means higher wages for thousands of banana workers on Fairtrade certified plantations, and a safety net to help them meet their essential needs.

As well as the Fairtrade Base Wage, the revised standard stipulates that up to 30 percent of the Fairtrade Premium must be paid out as a cash bonus, as a temporary measure to support worker’s incomes and help bridge the gap to a living wage where needed. This is on top of the existing 20 percent which workers can receive in cash if they choose so. Depending on local tax rules, workers may choose to receive the Premium bonus in vouchers, instead of cash. Fairtrade is the only sustainability standard that guarantees a fixed Premium for bananas, that workers decide how to spend.

“These changes are a significant step towards living wages for Fairtrade banana workers worldwide”, said Wilbert Flinterman, Fairtrade International’s Senior Advisor for Workers’ Rights & Trade Union Relations. “While in some countries, many banana workers are already earning living wages, in many others there is still a way to go. Now all workers on Fairtrade certified banana plantations will receive a guaranteed base wage and additional income support through the Premium until they reach a negotiated living wage. Fairtrade strongly believes that collective bargaining is the most sustainable and empowering approach to reaching a living wage, both for workers and their employers in the long term. Therefore, we will continue to work with our partners to strengthen labour relations and support workers to know their rights”.

Fairtrade’s Hired Labour Standard already requires wages to increase over time and plantations to negotiate a plan with workers’ representatives to reach a living wage. After applying the Fairtrade Base Wage, employers must agree on steps and timelines with trade unions or other elected worker representatives to bridge the remaining gap.

Fairtrade will monitor the impact of the base wage year on year. Roadmaps towards a living wage will be developed for each Fairtrade banana origin, recognising that, depending on where they are based, producers face different realities and challenges in raising wages. 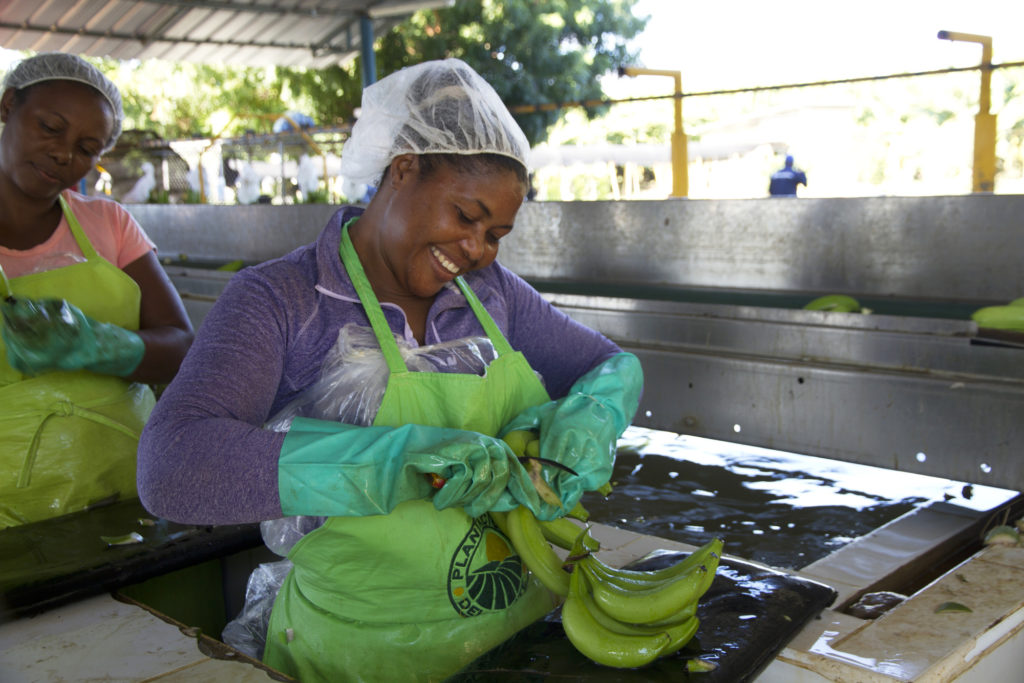 FAIRTRADE CALLS ON ALL ACTORS TO COMMIT TO A LIVING WAGE

More work still remains to be done to make a living wage a reality for all banana workers. Fully closing the living wage gap will depend on commitment and collaboration between different actors across the supply chain – from plantation owners to traders, retailers and consumers. In order to pay living wages, producers must receive a fair price for their bananas based on their costs of sustainable production – and that means selling enough of their bananas on Fairtrade terms. Yet now more than ever, producers are subject to retail price wars, and under pressure to accept lower prices.

“For Fairtrade it is essential that living wages are recognized as a human right and a normal cost of doing business,” Flinterman added. “Fairtrade urges retailers and traders to commit to fair prices, to ensure consistency between their sustainability pledges and sourcing practices, and to stop a race to the bottom in the banana industry. At the same time, we applaud those companies that have been doing the right thing.”