Together with Ben & Jerry’s we’re on a mission to make a living income possible for cocoa farmers in West Africa. 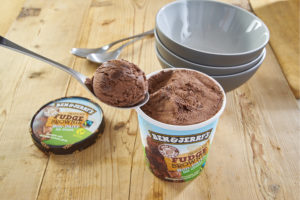 At Fairtrade, we believe that all farmers should be paid fairly for their work and have the opportunity to afford a decent standard of living. Our mission is to ensure that farmers are able to earn a living income, starting with cocoa farmers in West Africa. That means earning sufficient to cover all of their cocoa farming costs and basic needs.

Most of the world’s cocoa is grown in developing nations, places like Cote d’Ivoire, where there are few protections for smallholder farms. Almost all cocoa farmers live off the profit they make from their crop, which varies every year based on factors they cannot control, such as weather and commodity prices. Yet the average cocoa farmer there is trapped in a deeply unfair global trading system, earning less than $1.20 a day, which is less than half of what is required for a living income.

Often farmers are unable to pay for their daily needs, let alone invest in new equipment or methods that might be better able to respond to the effects of the climate crisis. Erratic rainfall, drought, and deforestation are making life even harder for cocoa farmers

Since 2012, we’ve been developing work on living incomes. In 2017 we launched Fairtrade’s Living Income Strategy and outlined a roadmap for making tangible progress towards living incomes for cocoa farmers. We’ve since made important strides in developing and implementing interventions and tools to raise the bar and we are partnering with forward-looking businesses on this journey.

So we’re super excited to be working with our friends at Ben & Jerry’s who have committed to paying a higher price, an additional $600,000 over the next year to their 5,000 cocoa farmers. This amount is on top of both the annual Fairtrade Premium of around $970,000 (paid on their chocolate ice cream mix) and the Ivorian government’s minimum price for cocoa that all companies are required to pay. The extra money that farmers will now receive is an important part of Ben & Jerry’s wider efforts to support farmers towards closing the living income gap.  Pretty sweet, right?

Since the early days, Ben & Jerry’s has focused on more than simply delighting fans’ taste buds. A big part of that is ensuring that their farmers, suppliers, employees, and communities are taken care of too. It all comes down to what they call linked prosperity.

Fairtrade partnered with Ben & Jerry’s years ago to source five major ingredients: Cocoa, bananas, coffee, vanilla and sugar. Fairtrade means better prices, decent working conditions, local sustainability, and fair terms of trade for farmers and workers in the developing world. So, whenever you see the Fairtrade mark on the side of one of Ben & Jerry’s tubs you know that the farmers who produce the ingredients are receiving the Fairtrade Price and Premium – income that supports farmers in improving environmental practices and adapting to a changing climate.

Fairtrade farmers agree to follow a set of standards that empower producers and benefit the environment and their community. In return, they receive a Fairtrade Premium, an extra amount of money on top of the selling price of their ingredients that they can use to invest in business or community projects.

Ben & Jerry’s Fairtrade Premiums make up between 1% – 2% of the total Fairtrade Premiums in the world. That Premium can make a huge difference. One cocoa co-op that they work with in Cote d’Ivoire was able to build a new medical clinic, hire a nurse, install solar panels, and purchase a water pump.

For many farmers, the Fairtrade Premium is life-changing, perhaps even life-saving. And now Ben & Jerry’s are exploring ways to do more. Now they are working with Fairtrade to pay a higher price to support their linked prosperity cocoa farmers on their journey towards a living income. 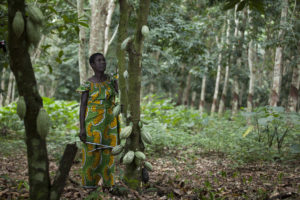 What is a Living Income?

Fairtrade define a living income as “sufficient income to afford a decent standard of living for all household members – including a nutritious diet, clean water, decent housing, education, health care and other essential needs, plus a little extra for emergencies and savings – once the farm costs are covered.” That “extra” is a big deal too: It means farmers are able to take care of their businesses, their communities, and the environment we share.

In short, a living income is about making sure cocoa farmers receive enough for today, and a chance to plan for the future.

Why we’re starting with cocoa farmers

Ben & Jerry’s want to be able to do the same for all of their Fairtrade farmers. But for now, cocoa feels like the right place to start, for two big reasons:

1.    Cocoa, no surprise to all the chocolate lovers out there, is one of Ben & Jerry’s major ingredients.

2.    Cocoa growers are particularly vulnerable to climate change and fluctuations in the global market.

As part of Ben & Jerry’s new price commitment for the cocoa, they will work closely with us at Fairtrade to evaluate and be sure they are making a positive difference to the 5,000 linked prosperity cocoa farmers.

How You Can Help

Every year, across all Ben & Jerry’s products, your purchases help empower about 210,000 farmers globally. We get to enjoy the delicious ingredients in our ice cream, and they get to invest in the health and prosperity of their families and communities.

All of which is to say, that Fairtrade matters! Next time you’re enjoying a delicious scoop of ice cream, remember that by choosing Fairtrade, you’re choosing the world you want to see, where cocoa farmers, their families, and their communities can build a better future.