The popular fruit works well in everything from smoothies to cakes – but this popularity that makes for a very competitive market and retailer price-wars, leaving farmers out of pocket and ill-equipped to deal with the many challenges banana crops present. 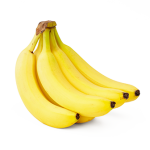 Please note that Fairtrade bananas are available in New Zealand and not Australia.

Peeling away the issues

Bananas are a staple food for millions of people and a major export that forms the cornerstone of many countries’ economies.  It’s attracted some pretty big multinational players which in reality, has diminished the rights and bargaining power of the smaller farmers and workers. This is pretty rough when working conditions are already so tough and labour intensive.

So what’s the real cost of a cheap banana? Potential human rights violations, environmental damage and a wage that’s below cost. This is where Fairtrade comes in.

Fairtrade began its work with banana producers and workers more than twenty years ago. The goal was and still is, to change the lives of farmers, workers and their families. We achieve this through two key mechanisms. The first is the Fairtrade Minimum Price, which provides a safety net for when prices get below cost. The second is the Fairtrade Premium – an extra sum of money paid that enables organisations to invest in their farms and become more competitive, such as improving infrastructure. Workers in banana plantations can also receive up to 20 percent of the Premium in cash payments. This figure rises to 50 percent if a majority are migrant workers.

Another way to spend the premium is environmentally-focused. This is about improving the soil quality and reducing the use of agrochemicals and pesticides which protects not only the environment but plantation workers too.

So what role can you play? Buy Fairtrade bananas! (then eat them of course).

A bunch of reasons to buy Fairtade bananas

Every Fairtrade banana you buy contributes to improving the lives of the workers and farmers behind this fabulous fruit. Here are some things you may not know about the sector and its achievements:

Unsustainability In New Zealand’s Banana Supply Chain: What You Need To Know

Where you can buy Fairtrade

You can make a difference by shopping Fairtrade. Find out how.